Countering the Jon Jones shooting stance (both hands down)

In his past fights, Jon Jones, especially during the first seconds of the first round, will start moving on all fours in what seems to be a wrestling shooting stance. This is a way for Jon to play games with his opponent’s mind, close the distance without his opponent charging at him and possibly get a takedown.


To deal with this fighters should keep their distance. Do not try to punch his head as he will probably be able to grab a foot. Let’s examine a successful counter by Quinton Rampage Jackson: 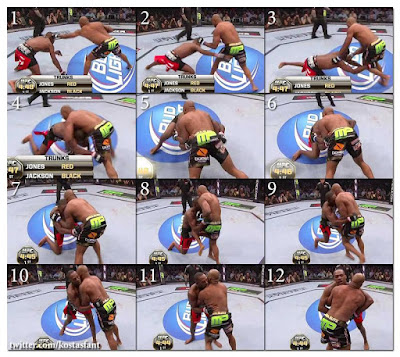 Quinton tries to touch Jones’ head, but Jon grabs a foot. Rampage sprawls and underhooks Jon’s left arm. As Jones stands up Quinton controls his head and lands a barely legal knee to the belly (mostly on Jon’s arm) and quickly gets double underhooks.

When Jon is in this mode opponents should avoid engaging him near the cage and try to disengage from the clinch as soon as they get the chance.