Countering the sidekick to the knee #2 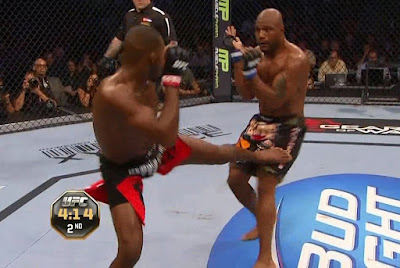 This is a preferable, Muay Thai counter. Notice in the gif below how puling the front foot back can make the kicker miss. A fast Thai-boxer should be able to land a right low kick to the kicking leg as it lands on the ground. And the kicker likely won’t be able to defend a follow up left kick should their opponent decide to attack with it.

To make up for my poor form in the video above here is kickboxing legend Rob Kaman. He is countering a teep kick but the concept is the same (video mirrored for orthodox):

It’s all in the footwork.
Here is Kaman again dealing with a side kick:

And to convince readers this works for MMA here is Gus:

In the sequence above Alex gets hit with the kick but is able to deliver his own right low kick when Jones’ foot lands on the ground.

And if all these seem too complicated, a fighter can just pull their foot back, as in the sequence above. A Thai stylist would just follow up with a left middle or high kick. Alex’s stance is loaded as this is in essence a kick-like switch. Please notice that in this version Jones kicks from the southpaw stance attacking with his back foot, thus telegraphing the move. Should an opponent go for a takedown, his balance also appears temporarily compromised.

Here a is a gif of the two sequences combined.

Posted by EMBRACINGTHEGRIND at 1:39 π.μ.