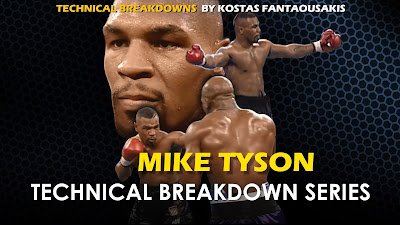 In fighting outcomes, fans often get the impression that it is just speed or power or even luck that gets the job done. Truth of the matter is that repeated results don’t just happen on a consistent basis without an effective technical background, no matter how talented a fighter is.

This is the power of Cus D' Amato's legacy: in peekaboo style boxing, every punch preceding or following an attack to the body is part of a well established system.

Every punching variation and every boxing combination derives from a rich history of high level competition where every idea, every concept was put to the test again and again.

Whenever a punch or a combination lands, talented coaches notice. Eventually, they manage to identify patterns that can be replicated and applied in similar situations. One such trainer was Cus D’Amato who was instrumental in helping Mike Tyson achieve greatness.

The importance of studying videos.

It is important to understand that all videos provided in these breakdowns are not highlight videos. They are study videos.

There is a difference.

You will not necessarily learn anything from a highlight video of knockouts as most of these knockouts are the result of unpredictable circumstances like fatigue, damage-taken or pure luck.

On the other hand, these study videos are the result of pre-planned training scenarios within the context of Cus D’Amato’s peekaboo system.  They are proof that the techniques or combinations work and as several variations of the move are provided, different scenarios can be examined.

The Speedforce striking combination syntax © is a way to document successful combinations in 1-3 lines instead of paragraphs.


Although we can never hope to reach heights of wisdom of a trainer like Cus D’Amato, we can at least appreciate his legacy, his love of the sport and his teachings. These articles try to do just that: help you appreciate the science behind successful application   and encourage you to do your own research. Sooner or later you will reach a point where a left hook is not just a left hook but a door leading to endless possibilities.

The tree of knowledge is strong when its roots are strong.

Kostas Fantaousakis (born on May 04, 1970 in Chania, Greece) is a certified MMA instructor (Greek Ministry of Sports) and a Brazilian Jiu-Jitsu black belt under 5th deegre black belt Wander Braga.
Kostas is a martial arts practitioner for more than 30 years and a passionate researcher of boxing and martial arts history. Besides training in MMA and BJJ Kostas has devoted his life in implementing a Jeet Kune Do concepts framework in Brazilian Jiu Jitsu, MMA and everyday life. His recent projects include applying Mayweather style mittwork in Muay Thai and MMA and utilizing kettlebell routines in MMA fighting preparation. Website: www.bragagreece.com
Between Jun 27, 2017 and May 4, 2020, Kostas Fantaousakis joined the creative team of Bloodyelbow.com as a blogger/technique analyst.

This website reflects his personal views on martial arts related topics including but not limited to MMA, BJJ, Muay Thai wrestling and philosophy.

Please share on social media to spread the love.