Welcome to Embracing the Grind 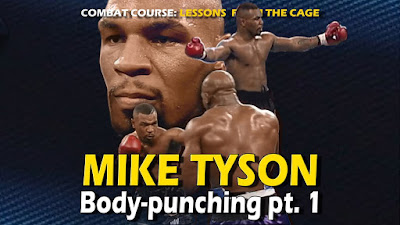 "True teachers use themselves as bridges over which they invite their students to cross; then, having facilitated their crossing, joyfully collapse, encouraging them to create bridges of their own." Nikos Kazantzakis

This is an archive of articles authored by Kostas Fantaousakis.


Kostas Fantaousakis is a researcher of fighting concepts, tactics, and techniques, and a state-certified MMA, grappling, and wrestling coach in Greece. He teaches his unique Speedforce MMA mittwork system © which combines strikes, takedowns, knees, and elbows applied in the Continuous Feedback © mittwork system of the Mayweather family. Kostas is a brown belt in BJJ under MMA veteran and BJJ world champion Wander Braga (the teacher of Gabriel Napao Gonzaga).

Currently Kostas is a fight analyst for Bloodyelbow.com , one of the most popular MMA websites in the world. 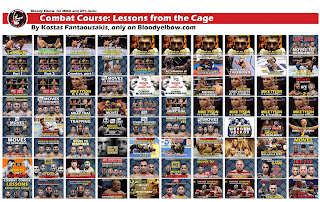 Aljamain Sterling made a mistake in the sequence above by going for the same move twice without setups. Sterling attacked with a left roundhouse kick to the body twice giving Barao the opportunity to counter with a right low kick to Aljamain’s supporting foot, sweeping him down. This is a beautiful Muay Thai counter attack.
Generally it is not a good idea to use the same attack twice.

Low kick to the calf

Ricardo Lamas landed a vicious low kick to the calf of Jason Knight putting him off balance. This low kick is underutilized in and is impossible to block. To use it correctly though, fighters need to move with penetrating force like a soccer kick while moving to the outside of their opponent’s front foot.
Gif found via GIPHY. Copyright UFC
My original post: https://www.bloodyelbow.com/2017/8/2/16072630/ufc-214-jones-vs-cormier-moves-to-remember-lawler-cerrone-mma-technique
Posted by EMBRACINGTHEGRIND at 2:39 π.μ. Δεν υπάρχουν σχόλια:

The two sequences above are examples of blocking and counterattacking kicks with low kicks.
In photos 1-3 Dober blocked a right teep from Burkman by deflecting it to the side with his right arm. This put Josh’s foot in a position for Drew to land a left low kick.

In photos 4-6 Drew blocked a right roundhouse kick and landed again with a low kick.
Notice in both sequences Dober’s stance was ready to counterattack with the low kick without telegraphing and wasted movement as speed is essential for counterattacks.

In his fight against Burkman, Dober was able to finish the fight with a fake jab to a jab to the body and then landing with a vicious overhand right. It is nice to see younger fighters set up strikes to the head with fakes and body punches. This is a very effective offensive tactic especially against counter strikers trapped with their backs against the cage.

A taller fighter can counter oblique kicks from shorter opponents, as I have suggested before, by kicking towards the side of the kicking foot. In this example, Jon Jones who is longer than most fighters, was able to kick higher and hit Daniel Cormier’s ribs. This is a good counter to oblique kicks especially for a southpaw against a fighter in orthodox stance.

As I suggested in “How to Beat Jon Jones pt. 1” one way to deal with Jon Jones style low sidekicks is to pull back in order to get out of the way and low-kick your opponent's attacking leg as it lands. Landing in a side stance makes fighters unable to block low kicks to the thigh. Cormier was successful in doing this twice.